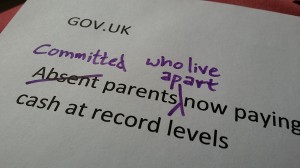 Not surprisingly the press coverage for this item used the same terminology.

But describing those who live apart from their children as “absent parents” is both inaccurate and insulting to all who do their best for their children, including paying child support maintenance.

That’s why Families Need Fathers (FNF) in England, Wales and Scotland jointly complained to the Department of Work and Pensions (DWP).

APART BUT NOT ABSENT

At FNF our role is to provide information and support to separated fathers who have problems getting contact with their children, and promote the benefits of shared parenting and significant involvement of both parents after separation.

Our members feel strongly that use of terms such as “absent parent” lump the hundreds of thousands of men (and a few women) who pay maintenance in the same category as the parents who refuse to pay.

This is grossly insulting to the fathers (and mothers) who care deeply for their children and try their best to be fully involved with their lives, especially since the legislation makes no direct connection between paying maintenance and having contact time with their children.

At Families Need Fathers, we hear from many fathers who pay up willingly but still face major opposition to any contact with their children.

We asked the DWP why they used this term in their press release, pointing out there are many different reasons why parents may have fallen behind in child maintenance payments, and that only a small minority of paying parents seek actively to evade their responsibilities.

Their response was an immediate official climbdown: “We will be more mindful of the connotations of this phrase and will make every reasonable effort to use more considered language in future. A note has been circulated around the Department’s press office advising of the negative connotations that may be drawn from the use of this phrase and asking press officers to take this into consideration in all future activity.”

It’s encouraging to get this admission from the DWP, but we are surprised that such complaints should be necessary, as attitudes towards separated fathers have changed in the decades since the Child Support Agency started in 1993.

The CSA has now morphed into the Child Maintenance Service, and it was decided some time ago to adopt the terms ‘paying parent’ and ‘receiving parent’ in most official documents.

It’s not perfect but a vast improvement from the 1993 approach.