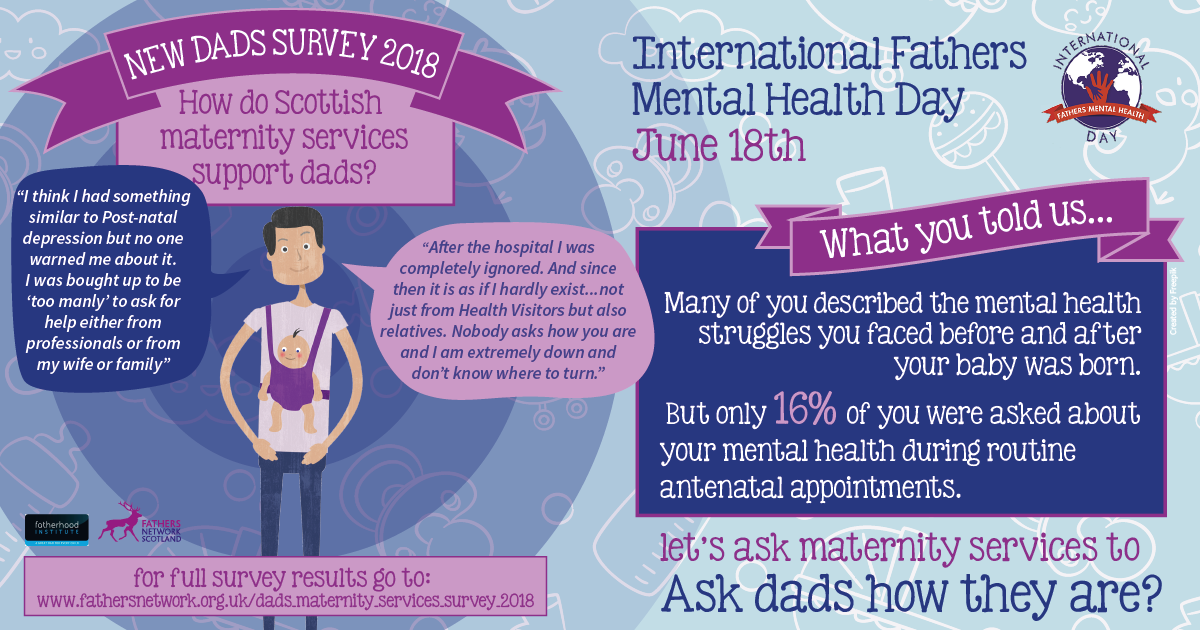 “I’m a massive part of my daughter’s life, I go above and beyond to be there for my partner who had postnatal depression,” recalls Dave*, a former police officer. “But when I started feeling low myself in the weeks after the birth, I realised I had nobody outside the family to turn to.”

Like many of those who left feedback in our recent survey of fathers’ experiences of maternity services, Dave was himself suffering from postnatal depression, which is well-documented in women, but also affects as many as one in ten men.

“I had days when I thought about taking my own life,” he told FNS. “But I’ve trained myself to take a deep breath and get a grip for the sake of my family. I just wish there was more support for dads out there.”

That wish was echoed by many of the respondents to our recent survey with the Fatherhood Institute, which found that although a father’s mental health is closely correlated with a mother’s, only 16% in Scotland had been asked about it by NHS maternity staff.

“I developed PND as a Dad after having both of my children,” said one anonymous respondent. “I had to deal with my wife struggling as much as I was struggling and there just wasn't anyone to turn to as a man… Not being allowed to stay [in hospital] with my wife was horrific. I had to go home alone. I admit that I cried a lot because I thought my baby would die and I wouldn't be there for him or for my wife.”

Others asked for a booklet or targeted publicity to help dads spot postnatal depression in themselves and their partners, and signpost services for talking to professionals. And that gap in public awareness is exactly what has motivated today’s third International Fathers’ Mental Health Day.

“We need to think family when it comes to perinatal metal mental and remember that if dad is the only one struggling that will impact on the whole family if unsupported,” says campaigner Mark Williams, who set up the campaign day in 2016, having himself developed mental health problems after his wife experienced birth trauma.

Mark, who spoke passionately at our recent conference, says the causes of mental health problems, such as postnatal depression, are every bit as relevant for dads as they are for mums. [continues below]

Often, the perception is that postnatal depression is hormonal, so could not possibly affect fathers – but hormones only play a small part. Environmental and social factors, such as social support, poverty, relationships changes, education, and stigma, are a much better predictor. These equally apply to dads.

TIME TO TURN THE LIGHT ON

“Not only that, men find it much harder to seek support for emotional problems, often because of stigma and societal perceptions,” Mark explains. “It’s not thought manly to express emotion. But the impact of mental illness for men can be catastrophic. The biggest killer of men under 45 is suicide. The main factor in suicide is poor mental health. Men are more likely to take their own lives, if they do talk about their mental health problems.”

Today Fathers Network Scotland adds its voice to the campaign for better support for dads around the birth of their children. Because supporting dads ultimately strengthens the whole family and gives a better start to our children.

In the case of Dave Macleod, it was the support of men he’d met in his Dads2B antenatal classes which ultimately helped him find his way through his postnatal depression. “That brought a massive change to my confidence,” he reports. “And they’ve helped me get back to being the hands-on dad and partner I always wanted to be.”

Despite the huge gaps highlighted by our survey, there are pockets of excellent practice across Scotland. So let’s follow the example of groups like Dads2B and #dadup the maternity services for fathers – and watch the benefits ripple through the whole community.