Past belters have included: Is the Evil Vilgax (from Ben 10) really evil, or just listening to his naughty part? What is Charlie (our cocker spaniel) thinking about when he stares? Or what happens to us when we die? Lying on the carpet beside my son’s bed, I wonder what it will be tonight.

“I don’t believe in God any more,” announces my son. “A boy in my class says he’s just a myth.”

“But what do you think?” he says, anxiously. The clock ticks in the darkness.

Do any other dads out there struggle with just how truthful to be with their kids? Are there any useful rules of thumb on when to tell “white lies” and when to be absolutely honest?

I know it’s a dilemma that’s not unique to father-child relationships, or indeed adults: as an anxious pre-teen, I remember playing along with Santa Claus for several years after I’d worked out the truth, partly out of a desire not to spoil the magic for my parents.

In her book Why We Lie, the psychologist Dorothy Rowe writes: “If parents lie consistently about just one thing, say, the reality of Santa Claus, the child can be deceived. But if they lie about something that affects every part of the children’s life, the children know that something is wrong, even if they do not know what it is.”

I think she’s right. My son knows immediately if there’s any discord between his mum and I, however tactfully we feel we’ve been concealing it. In these situations, it’s better to tell the truth with specificity and compassion. “Sometimes me and mum see things differently and we have to work out a compromise – and sometimes we end up arguing. But it doesn’t mean we’re going to split up.”

Which is fine, as long as this is true. But what about those situations when the worst really might happen?

I always wince at those Hollywood movie moments where a dad facing a marital breakdown/terminal illness/terrorist kidnapping threat says with fierce love to his child: “Honey, I promise I will never let you down!” (Oh really? So what happens when you lose custody/touch/consciousness/your life? What will that mean to your child? Will they ever believe a promise again?)

Or conversely, do children need such well-intentioned absolutes, regardless of whether they turn out to be true in the long-term? Do we forgive our parents these betrayals in the same way that they learned to ignore all those socially conditioned white lies of their parents’ generation? (Don’t pull that face – the wind might change and you’d be stuck with it! You’ll go blind if you keep doing that! You’ll get square eyes if you sit too close! Santa won’t come unless you behave!) I don’t think so.

So what should I say about God?

I have an atheist friend who freely admits he has contemplated sending his kids to Sunday school because he thinks the modern lack of spiritual certainty has left us rudderless. In my own case, I know that my own childhood faith was crucial in giving me a sense that I was unconditionally loved (and therefore loveable) regardless of what was happening in everyday life.

God was important to my son too, particularly when he was three and asking what would happen if we died. I used to say: “Well, people usually die when they’re much older than me or mum. But even then, God holds everyone in his hands - and none of us can fall out of God.”

I still broadly believe this, but would be slower to define God than I once was. Nowadays, rather than the bearded interventionist patriarch of yore, I think about a “higher power”; an energy which I can call on, perhaps as much from within as without; the force of love which we humans embody at our best. So in that sense, I think my son is right that God is a myth – and a very important one at that. I mean myth in the sense of a powerful allegory or story which contains a larger truth.

But of course, that’s not what my son means. He wants to know if God is real in the way that my hand is real, holding his. So: do I believe in God?

I choose my words carefully. “To be honest, love, there are times when I find it hard to believe in a God like that. And there are other times when I feel sure there’s somebody bigger out there looking after us. And sometimes I just don’t know.”

Looking down from his Scooby Doo pillow, my son’s face lights up. “That’s what I think too, dad!” he says with relief. “Sometimes I believe in God and sometimes I think he’s a myth!” He yawns, squeezes my hand, and within five minutes he is asleep.

I still don’t know when or if it’s right to tell white lies. But looking at my sleeping son, I can’t help thinking that an honest answer, however complex, is sometimes preferable to the lingering suspicion of a kindly-meant lie.

What do you think?

Nick Thorpe is an Edinburgh-based author and journalist. His latest book, Urban Worrier: Adventures in the Lost Art of Letting Go, is published by Little Brown. 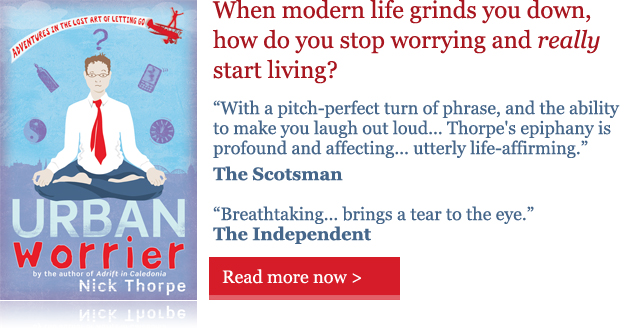