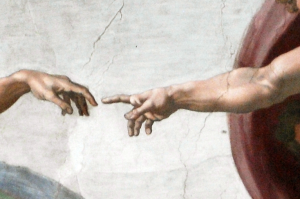 THE stereotype is well-documented: men don’t talk. And specifically, men don’t talk about their feelings. On top of this, the men I wanted to speak to for my PhD were those who are typically considered ‘hard to reach’ – men who live in deprived areas of Glasgow with difficult lives – the ones who normally research doesn’t manage to engage.

So I had a number of doubts as I embarked on my research project: would I even be able to recruit men to a study asking them to talk about their lives as fathers? And would these men talk to me about intimate and emotional subjects such as parenting, their views of fatherhood and their own childhoods?

The first interviews I conducted banished any worries I may have had. The men were open, sincere and very frank about personal events that had happened in their lives and reflective in their discussions of how these had affected them.

I ended up interviewing a disparate group of 29 men: all fathers, or about to become fathers, but facing all sorts of challenging circumstances ranging from mental health issues (themselves or their partners) and drug addictions, to family involvement with social work and the child protection system.

I was particularly interested in what it means to men today to be a ‘good father’; what shapes men’s ideas about their fathering role; how involved they expect to be, or are, in their children’s lives; and how living with difficult parenting circumstances constrains or enhances men’s fathering. Research such as this is important as the more we understand about what fatherhood is like for dads in challenging circumstances, the better the services we can develop to help support fathers and families in the future.

The men told me fascinating stories about their lives, and frequently described their aspirations to offer their children more than they had had themselves. In doing so, they discussed openly their childhood experiences, some happy, others heart-breaking.

Kenny, a stay-at-home dad of four, described his childhood experiences of growing up with an alcoholic mother who was not always reliable or caring, and an abusive father. Kenny spoke about how these experiences had made him more determined to provide a home environment of safety and security for his own children. His commitment and dedication to providing unconditional love, affection and stability for his children was clear.

Men described in detail how they spent time playing with their children, listening to their children’s problems and worries, and teaching their children life skills and moral values. In doing so they shared their ideas about what it means to be a good father, and a good man. They told me about their aspirations for their children and the challenges of providing everything they wanted to for them. Contrary to popular wisdom, these men were not reluctant to share their feelings or to talk at length about their lives as fathers.

Throughout this experience of talking to men about their fathering aspirations and experiences, what has made the biggest impression on me has been the men’s openness and enthusiasm for telling me about the intricate details of their lives.

My findings shed light on the challenges of trying to do the best you can as a father in less than perfect circumstances. But they also highlight the willingness of these men to talk about the emotional aspects of parenting – their aspirations for their children and themselves, their strong desires to be the best dad they can be and their efforts to achieve for their children better than what they had themselves.

So maybe it’s time to ditch the stereotypes. Men today are ready and willing to do what it takes to be a good father and to talk about their struggles and joys as parents.

Let’s get rid of old stereotypes that do nothing for men and women, and start creating some new ones which can really benefit families.

I would like to thank the organisations I worked with (Quarriers, Geezabreak and the THRIVE study), without whom I wouldn’t have been able to meet the men who so willingly told me their stories, and of course the men who took part in the research. Names have been changed to protect privacy.

Karen is a 3rd year PhD student at the University of Glasgow, studying modern-day fatherhood in the context of social disadvantage. She can be reached at [email protected].