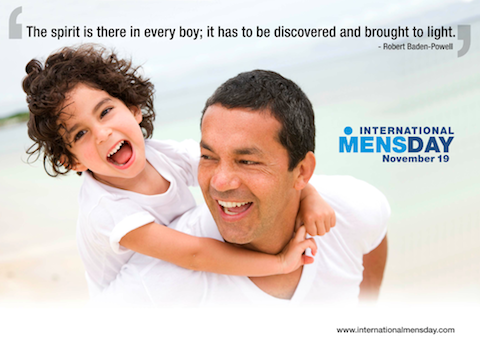 As International Men’s Day rouses both support and controversy, NICK THORPE appeals for men and women to work together for gender equality.

That’s the gist of the criticism levelled by some at today’s attempt to “make a difference for men and boys”. How can you have an awareness-raising day for a group that already wields disproportionate power? It simply reinforces the inequality of women.

It’s an important perspective for anyone who recognises (as FNS does) the historical truth of male privilege in society, but it fails to recognise that the particular problems facing men – higher suicide levels, lower life expectancy, underperformance in school, higher prison population, to name a few – are #biggerissues at least partly because we don’t talk about them.

That’s why we support CALM UK’s #biggerissues campaign, launched today on International Men’s Day, to address why suicide is the single biggest killer of men under 45.

And it’s also why we’re so excited at the prospect of Year of the Dad, now only weeks away from launch in January 2016 – and why we want to address those asking: “Why a year for dads? What about mums?”

Because although we’ve had overwhelmingly positive responses from government and other organisations joining us in this awareness-raising campaign, some have also raised challenging questions.

“Why congratulate stay-at-home dads for doing their job as parents?” as one writer put it. What’s in it for the women who have for generations, millennia even, tirelessly taken the lion’s share of the domestic contract in return for discrimination in the workplace?

It’s an important question to address on International Men’s Day. Why? Because criticism of both events relies on the same zero-sum assumption that what is good for men will automatically come at the expense of women – whereas we believe the opposite.

We believe, in common with our funders at the Scottish government and a huge raft of family-friendly organisations across the country, that "celebrating the difference a great dad can make" will create a win-win for both genders – not to mention the most important winners: our children.

Tim Porteus, a storyteller, father-of-five and passionate advocate for dads in Midlothian, puts it particularly well: “A lot of men are now saying I want to be engaged with my children, I want to be that nurturing dad. But then ironically they come up against the same patriarchal barriers that women experience, but from the other side – about being forced into the role of being the breadwinner, where social and health services focus on motherhood as quintessential parents while dads are peripheral. Now men are saying, no, we want to move into that nurturing role.”

In his work at Midlothian Sure Start, Tim works to support men who want to be better parents. “We’re not forcing change – it’s dads who are demanding it. And that will obviously have benefits for women – for every extra hour of childcare a dad does, that’s an hour mum has to do something else – but the main beneficiaries are children.”

A raft of studies shows how children whose fathers are closely involved over the course of their childhoods tend to be happier, healthier, do better at school, have greater self-esteem with fewer behavioural problems.

When housework is shared and dads are involved through teenage years, girls are also less likely to follow gender-stereotyped careers in favour of trying new things instead, while boys will be less likely to fight, and more likely to choose egalitarian relationships.

All of this is self-evidently good for women, and not just in terms of domestic politics, but also on the frontier of equality in the workplace. Heartening as it is to hear today that the gender pay gap has narrowed faster in Scotland than in the rest of the UK (7.3 per cent compared to 9.4), it will never finally disappear until men step fully into their crucial parenting role.

Feminist campaigner Gloria Steinem put it memorably: “Women are not going to be equal outside the home until men are equal in it.”

That’s why the Year of the Dad, announced by Deputy First Minister John Swinney on fathers’ day this year, is an important part of the gender equality campaign championed by First Minister Nicola Sturgeon earlier in the year.

It’s why we support 50:50 by 2020 in the push for gender equal boards – and why we mirror that aspiration in our own organisation, with a gender-balanced board, a female CEO and a flagship six-week paternity leave policy.

One initiative facilitates the other: studies show that when dads step in to care for children so mums can return to work, women work more hours and earn more money. A study in Sweden showed that for every month dad took for parental leave, mum’s future earnings increased by 7%.

And as a bonus, the new balance leads to greater marriage satisfaction, lower rates of divorce and more shared custody. It could even improve your sex life, according to a recent US study, which found that couples who shared the domestic contract reported having more sex, and better sex, than conventional couples where women did the bulk of the housework. Inevitably they’re calling it “choreplay”?

So why aren’t things moving faster in wider society? Why aren’t dads yet rushing to take up the new shared parental leave entitlement announced in April?

Because as women have known for aeons and men are now discovering to their cost, a patriarchal culture takes time to shift and loosen its hold. In confining ourselves and our egos and identities to the work sphere for so long, we men seem to have lost confidence in our own parenting ability, and need help and encouragement to rediscover it again.

We need to question the assumptions our employers and service providers make about our abilities as parents. Perhaps they need a friendly reminder of what is important in our lives.

That’s what Year of the Dad is all about because while all the evidence is that the culture shift is already happening, and we want it to happen more quickly for our children’s sake.

Some of us believe that shared parental leave, currently a voluntary option on all sides, needs to be incentivised as in Iceland, Sweden and elsewhere, with a portion of “use-it-or-lose-it” daddy leave.

DADS GET BETTER BY PRACTISING

The great news from these places – particularly for those of us from either gender who privately wonder if women aren’t just better cut out for parenting – is that dads become better parents by practising.

In fact a study by Bar Ilan University last year showed that the maternal instinct is by no-means hardwired. As primary caregivers, women do develop neural pathways in their brains that make them more responsive to emotional cues in their children, but the study found that the same pathways developed in fathers when they were primary caregiver.

There’s no such thing as a “natural parent” in other words. So the more parental leave or devoted dad-time we are able to take alone with our children – changing nappies, getting baby to sleep, soothing and responding - the more we’ll rock (and enjoy) being dads.

Interestingly, taking two weeks off when the child is born does not give the same benefits to dads, mums or children as taking three weeks or more once our partners return to work. And the more leave men take in the early years, the more satisfied they are with our relationships with their children – and the more likely they are to remain involved in childcare after their return to work.

It’s clearly a win-win-win, isn’t it? And just as clearly, we men need encouragement to trust our nurturing instincts, stick our neck out at work to claim parenting time and celebrate the difference a great dad can make – to women, children, society, ourselves.

The old stereotype of married breadwinner and disciplinarian no longer serves us in an age of increasing diversity and gender equality. Today’s father can be single or married; externally employed or a stay-at home dad; gay or straight.

While some biological dads don’t do fathering, other non-biological dads can and do - whether that’s grandfathers, uncles, foster fathers, adoptive fathers or stepfathers. Whoever they are, it’s time to celebrate and support the key contribution fathers make to child development, family and community life.

In the coming year we’ll continue to seek dialogue with all who share an interest in children’s wellbeing and we welcome feedback in an open spirit of dialogue of mutual respect - whether that’s encouragement or help in identifying our inevitable blind spots.

So today on International Men's Day, as in Year of the Dad as a whole, let’s seek the best for mums AND dads – and for our families.

Find out more about #biggerissues at www.biggerissues.co.uk. Sign up for Year of the Dad at www.yearofthedad.org