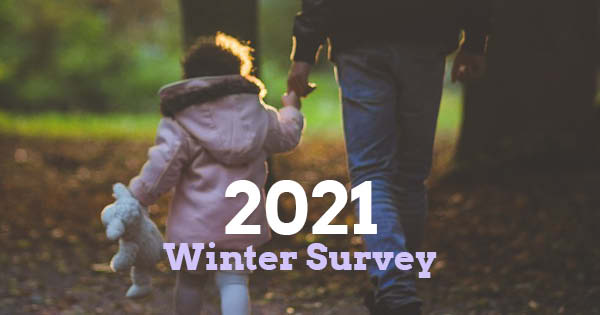 It has been over a year and a half since COVID-19 became a household name. A pandemic was declared and the First Minister warned Scots that we were facing "the biggest challenge of our lives".

During the first lockdown dads stepped up to be much more hands-on with their children, almost doubling the number of hours they took care of their children, on average.

As we lived through the second national lockdown dads struggled to balance work and family life and their mental health deteriorated. On the plus side the number of hours a dad spent playing with their children or supporting their learning had increased, as had their determination to spend more time with their kids in the future.

As we make sense of what has happened over the last 18 months and come to terms with the seismic shifts in our society we wanted to find out what life is like for dads out of lockdown. 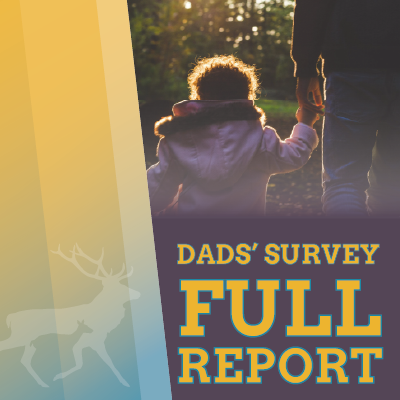 The 'Out of Lockdown' fathers survey was carried out between 10 October and 7 November and captures the voices and experience of 175 dads from across Scotland. It builds upon survey data collected by FNS during the first and second national lockdowns and paints a picture of dads lives at home & work, their mental health, their relationship and how they want to parent in the future.

Over a third of dads described their mental-health as bad or very bad an increase of 14% in 18 months. 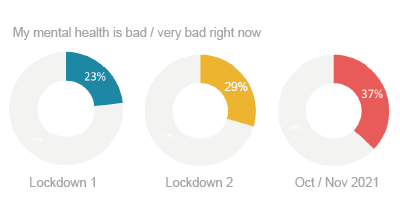 “Being a shielder and having a 4 year old little girl whose mum passed away at the start of covid, life has become so difficult. I feel ignored and forgotten about in life. We just lost money through benefits and reduction on pip. I don't know how they are expecting us to live anymore. It's so hard just getting through a day and with Christmas coming I just wish the world would swallow me up.”

Relationships between dads & partners or co-parents have been badly affected 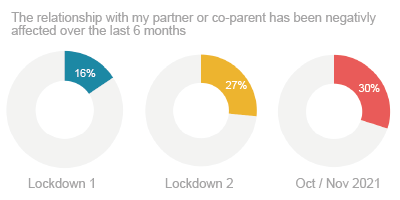 Dads reporting that the relationship with their co-parent has been negatively affected has almost doubled since the first Lockdown. Lack of time and conflicting demands are putting pressure on couples relationships. This correlates to a 12% drop in the number of dads sharing how they feel about their mental health and wellbeing with their partners.

“We are both exhausted by life and constant pressures.”

“Less money, less time and more stress leads to more arguments than before.”

Many dads expressed their struggle to balance making money & being there for family or children.

Easing of COVID restrictions and access to supportive workplace cultures and homeworking are having a positive impact. 27% of dads rate balancing work & family life as easy or very easy (an 8% increase since the second lockdown).

“I used to travel for work a lot before the pandemic and be office based. I have been working at home and travelling much less in the last 18 months which has allowed me to take the kids to school almost every day, which has been amazing.”

However 40% of dads rate balancing work & family life as challenging or very challenging. Dads working long hours, away from home or on shift patterns are particularly badly affected as are those with unsupportive workplace cultures.

“I work long and unusual shifts so it is challenging. I also travel for work for multiple days at a time. I often think that the balance isn’t right, however without travelling and working long shifts I wouldn’t be able to afford a lot of my family’s needs.“

“Wife currently recovering from postnatal hospitalisation. I work on call and often away at short notice. Life has been hard since work from home stopped!"

Spending time with their children remains a priority for dads

“I love just being around them....they're bloody brilliant!”

"I love spending time with them, building things, going on adventures and being silly"

“She has been a shining light during these difficult times. Watching her curiosity grow and watch as she learns new things has given me so much joy.”

Dads don’t want things to go back to 'normal'. 58% of all dads surveyed said they wanted to change the way they parent in future & 41% of those told us they wanted to be there more for their children.

“I want to be there for my son a lot during the week, as I've been working from home and seeing him in the morning and evening has been great.”

“I want to be around more, definitely. My kids need me to support and help them grow.”

So, What Does All This Mean?

Our mission is to drive positive cultural change by inspiring organisations, communities and individuals to engage, support and empower men to be the fathers they want to be.

In a modern world at odds with last century’s stereotypes of working life, millions of men are choosing to immerse themselves in childcare and domestic life, while women rightly seek equality in the workplace.

Government policy increasingly reflects this new reality, but a cultural lag means fathers often remain invisible or ignored when it comes to children and family services, childcare, education and health.

Our survey shows that many dads hope to continue to work flexibly and spend more time at home post-lockdown, but the pressures of juggling work and home life are having a detrimental impact on their mental health.

Legislation on flexible working and shared parental leave will only benefit dads once employers stop seeing children and parenting as the preserve of women and dads feel it’s okay not to be the traditional long hours breadwinner.

For more information about our survey and findings, please contact Cathy Sexton at [email protected]

Watch our DADx Life Out Of Lockdown Dads Survey Results