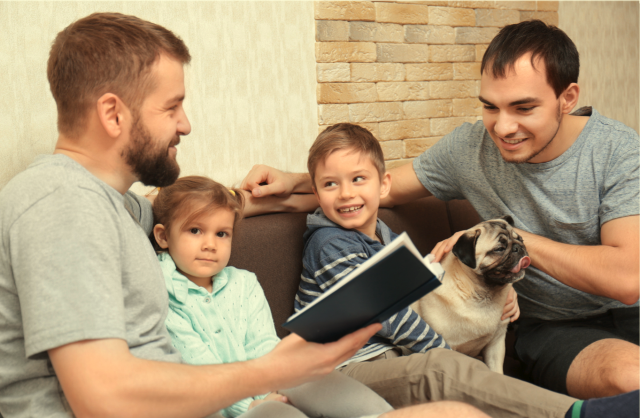 The issues become starker when a marriage or relationship breaks down. One parent, usually the mother, becomes the “parent with care” and the other discovers he is classified as “non-resident parent” – even if his children live with him up to half of the time.

Rebecca Goldman, Research Associate with the Fatherhood Institute, presented findings from her three-year research study Where’s the Daddy?, showing how key national datasets such as the Census, Labour Force Survey and Growing Up in Scotland often fail to take into account children and parents living across households. Understating leads to undervaluing in policy development.

Funded by the Nuffield Foundation, Where’s the Daddy? recommends that today’s diversity of fathering should be captured in official statistics. First, fathers such as birth, adoptive or ‘step’ should be differentiated: often these are lumped together. Second, it recommends that separated fathers should be reclassified in terms of whether - and how much of the time - they live with their children: full-time co-resident, part-time co-resident or non-resident.

In nearly three quarters of separated families, children have some contact with the parent who has left the family home – but without knowing the level of contact we do not know the impact different levels of parenting have on the child’s longer-term wellbeing and development. When researchers say they have gathered data from “the family” that in reality means the mother and sometimes the children. It has not yet been collected from the “non-resident” parent, meaning that researchers can’t yet understand either the level of this care or its impact on the relationship.

Rebecca Goldman, lead author of the datasets review, said: “We must put dads into the data. The large research datasets that we studied are drawn upon by hundreds of researchers and policy makers every year, to understand and shape social practices. Yet the insights most of the datasets afford into father-child relationships and patterns of care are often inadequate. It’s been good to present this data at the Scottish Parliament cross party group and to statisticians from National Records of Scotland and the Office for National Statistics.”

Ian Maxwell, Families Need Fathers Scotland, commented: “A data desert tends to lead to a policy desert. This isn’t just an issue for fathers, it is important for mothers too and above all for the children. There is a mountain of research from around the world that the greater the involvement of both parents the better the life chances of the children.”

Paul Bradshaw, Head of ScotCen, which runs the Growing Up In Scotland Longitudinal study, said: “Researchers and funders interested in exploring the many complex and diverse lives of families and children increasingly appreciate the important role that dads play. Fully understanding that role means having the right data to do so. However, sometimes gathering the right data can be challenging. ScotCen researchers involved in the Growing Up in Scotland study have discussed these issues with experts from government, academia and the voluntary sector to understand how these challenges might best be overcome in order to create a dataset and study that is more inclusive of dad data.” (see http://www.gov.scot/Publications/2009/01/21085002/8 for GUS data on “non-resident” dads)

Sam Pringle, Fathers Network Scotland, commented: “This is not just a matter of gender equality, but a huge concern to anyone interested in the wellbeing of children. Only when a true and detailed picture of modern families is available, will we be able to plan and legislate for the flourishing of children and families – and the men and women who nurture and support them as parents & carers.”

The purposes of the group are: The Group will identify, examine and promote policy and practice that supports parents in sharing parenting responsibilities. It will consider how gender stereotypes can be tackled in the pursuit of a better understanding of what we need to do to ensure the best possible childhood and most promising adult life for Scotland's children. It will provide a forum for MSPs, stakeholders and other interested parties to engage directly in dialogue to inform policy developments and practice which impact on parents sharing responsibilities for the role and support networking on this topic. http://www.parliament.scot/msps/shared-parenting.asp

Adequate parenthood questions for both men and women should be viewed as a priority in data collection for research and administrative datasets, alongside other core variables such as “sex”/gender, socioeconomic group and economic activity. With this in mind, we recommend the following:

The Nuffield Foundation is an independent charitable trust that funds research and student programmes to advance social well-being across the UK. We want to improve people’s lives, and their ability to participate in society, by understanding the social and economic factors that affect their chances in life. The research we fund aims to improve the design and operation of social policy, particularly in Education, Welfare, and Justice. Our student programmes enable young people to develop their skills and confidence in quantitative and scientific methods. www.nuffieldfoundation.org

The Fatherhood Institute (founded 1999, charity number 1075104) is a world leader in the fatherhood field, with a unique grasp of policy, practice and research. Our twin focus is child wellbeing and gender equality. Our research summaries, published free of charge on our much-visited website www.fatherhoodinstitute.org, are drawn on and cited all over the world; and our trainings in father-inclusive practice (online and face-to-face) are highly praised and evaluated by service providers. We work directly with fathers and couples in community, education and health settings, and train local facilitators to undertake this work. We also work with fathers and mothers in the workplace (seminars/ webinars/company intranet materials) and offer HR support to organisations aiming to develop competitive edge and reduce gender inequalities at work, through recognising and supporting male employees’ caring responsibilities.

Families Need Fathers Scotland is a registered Scottish charity (SC042817) which aims: 1) to advise and support parents to stay in touch with their children after divorce or separation; 2) to further the emotional development of children in Scotland by encouraging shared parenting arrangements; 3) to conduct and publish research into problems around parents living apart from their children in order to encourage appropriate changes in professional and public opinion.

Fathers Network Scotland is a young, dynamic and award-winning charity (charity no. SC041341) with a passion for dads – because the family and society as a whole benefit when fathers are involved in the life of their children. It works with a wide range of organisations to help them support dads, and offers a range of services including training, consultancy, events, research and media work. www.fathersnetwork.org.uk.