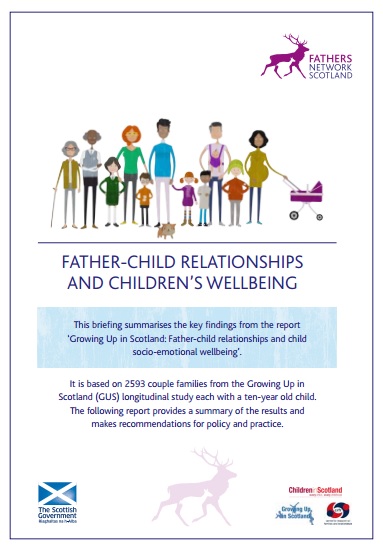 Watch Dr Alison Parkes' summary of the report on YouTube

The study was commissioned by the Scottish Government in collaboration with Fathers Network Scotland as part of the Year of the Dad 2016. The study considers several important issues for policy makers and practitioners involved with family influences on children’s socio-emotional wellbeing.

Mother-child relationships are also considered, in order to view the totality of parental support for the child, and see where the child’s relationship with one or both parents may need strengthening.

In 2014/15, children in the study sample (average age 10, in Primary 6) were asked a series of questions about their trust in, and communication with, their resident father or father figure resident in the biological mother’s house. These questions measured the extent to which fathers were emotionally supportive of the child.

Over the past two years Fathers Network Scotland's main focus has been on dads' mental health, and how services can...