Determined that their newly-adopted twins would get quality bonding time with dad as well as mum, the Glasgow couple went proactively to their joint NHS employer to request shared parental leave – giving Nikki five months and John the opportunity to take over for the next seven.

They’re just one of countless families quietly confounding the age-old stereotypes that cast women as carers and men as earners, and in the coming Year of the Dad 2016 we’ll be highlighting many of them – individuals, employers and service providers – as we join with partner organisations to celebrate and promote this radical cultural shift towards parenting equality.

“It’s been brilliant,” says 45-year-old John, already five months into his role as stay-at-home dad for two lively toddlers. “Before I started my time off, the twins would always go straight to Nikki if they fell over, but since then our bonding has hit a whole new level.”

Building attachment is particularly challenging in adoptive families – another reason why shared parenting was so important. “Today at nursery they almost knocked me over with their excitement. It’s an amazing feeling!”

Underpinning Year of the Dad is a growing body of research showing greatly improved outcomes across the parenting spectrum for children when dad is more involved. Recent the Economist quoted OECD findings that dads in Britain who took time off at birth were almost a third more likely to read books with their toddlers than those who hadn’t; a Norwegian study meanwhile found that the children of fathers who took paternity leave were more likely to flourish at secondary school.

All of which makes the recent introduction of Shared Parental Leave legislation particularly good news for UK parents: introduced in April, it means millions of couples can now split 52 weeks of maternity leave and 39 weeks of statutory maternity pay between them. 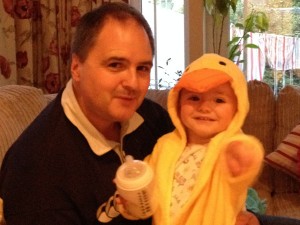 But the experience of countries like Sweden shows that significant uptake from dads will depend on culture change – and that requires bold pioneers like the Duncans and their joint employers at Greater Glasgow and Clyde Health Board, which allowed them to share their leave long before it became law.

When their two-year-old twins came to live with them last August 2014, Nikki took five months off from her job as associate specialist in A&E at Glasgow Royal Infirmary; then in January this year it was the turn of John, a respiratory nurse specialist in the same hospital, to begin his seven-month stint as stay-at-home dad.

“It wasn’t difficult, but it was very unusual,” says John, adding that theirs was the first case of split leave his employers could remember dealing with. “My own line manager has been absolutely fantastic about it. At the end of the day, employers have nothing to worry about, because people given this opportunity will be more loyal, so it’s win-win.”

The recent Scottish Top Employers for Working Families Awards showed the Duncan’s experience is far from unusual, with the most forward-thinking organisations already embracing this flexible working ethos, from small business to multinational corporations.

We’ll be working with many more during the Year of the Dad, in partnership with the Scottish Government and many of you, to recognise good practice and celebrate a shift in attitudes as dads get more opportunity to share parenting alongside working responsibilities. The aim is to:

Is there something more you could do to help push forward this positive change? Could you hold an event for dads? Write a blog about the positive role of dads and post it online? Tell your own story as a dad, or pay tribute to your dad? Encourage your organisation to sign our Year of the Dad charter? Add your group to our database? We’ll be offering all these possibilities and more as we roll out resources in the coming months – so please sign up to stay informed!

Together we can help advance the vision of a safe and compassionate Scotland where all children, their families and communities are enriched and strengthened through the full and welcome involvement of their fathers.

“There’s still this idea that dads find it hard to muck in,” says John. “But I don’t think there’s anything apart from breastfeeding that a man can’t do just as well as a woman. It’s a modern age, we cook, we clean, we look after the house just the same.”

Indeed, the rebalancing of gender roles is already under way if John’s experiences are anything to go by. In toddler groups where he would once have been the sole dad, he’s meeting other men who have taken similar decisions to prioritise their children.

“These are legal rights now, so you shouldn’t feel you’re going to lose job prospects just because you have a family,” says John. “I would hope that the glass ceiling will be broken for women as a result of more equality for everyone.”

He plans to go back to work part-time when leave ends in August, so he can continue to be the main carer, while Nikki will remain at work as the higher earner. He hopes his family’s example will inspire others – parents, employers and service providers alike – to take bold steps in the Year of the Dad.

“For any dad wondering whether to ask for leave, I would say: do it!”

Sign up for updates on Year of the Dad at www.yearofthedad.org.